Kersey village is one of the central locations in BritBox’s Magpie Murders.  The murder mystery is based on the book of the same name by award winning author Anthony Horowitz.  Screen Suffolk helped the production to close the main road through the village last May for two weeks for filming.  The village was transformed into Saxby on Avon both in the 1950’s and the present day.

As way of a thank you Eleventh Hour Films and Screen Suffolk hosted a screening of the first two episodes of the show at Kersey Church.  The church was used countless times during the series and was the perfect place to bring the village together to see the results of the filming.

Anthony Horowitz hosted the screening with his wife, Executive Producer of the show, Jill Green.  They introduced the episodes and gave the audience an insight into how the book was adapted into a screen play.

“It’s been so great because the village was so hospitable for us when we were shooting – they were so friendly, so welcoming, so helpful, and so supportive. That doesn’t always happen,” 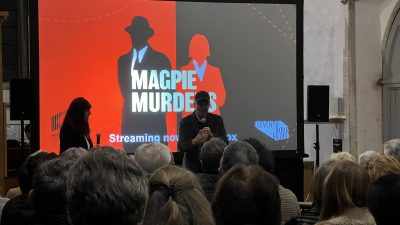 “cannot believe this village is a real place”.

After the intro Anthony and Jill were on hand to answer residents questions and explain more about how their village was chosen.  It was such a great event and so lovely to hear from residents how they had helped with filming.  Some were supporting artists and others had their houses used as locations.

The parish council were very supportive of the filming and we worked closely with them to make not only filming but the screening happen, they said:

“It will raise the profile of our beautiful village, the iconic church and our lovely local pub, The Bell Inn”.

There is no doubt that the tourism benefits to Kersey will be felt for years to come, especially when the series comes out across the pond.