BBC’s The Detectorists returns to Suffolk for Christmas special

Much loved comedy series The Detectorists returned to Suffolk earlier this year to film.  The show which follows metal detectors Lance (Toby Jones) and Andy (MacKenzie Crook) has filmed in Suffolk for the previous three series. 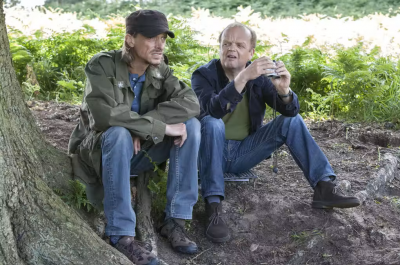 The Christmas special will be aired on BBC2 at 9pm on Boxing Day. Danebury Metal Detecting Club finds itself the target of property developers, and after losing out on a big finder’s fee the club needs something big to happen to save itself from extinction.

Almost the entire episode was filmed in and around Suffolk, and Screen Suffolk were responsible for permissions for their most valuable location, Framlingham.  Although the series is set in Essex, the fictional town of Danebury is entirely filmed in Framlingham, the popular East Suffolk town.  A key scene in the new special features Lance and Andy chasing a skip as it drives off down the road just outside The Castle pub.  Screen Suffolk worked with the locations team, residents, and council to ensure that the filming caused as little disruption as possible.

‘There were lots of elements to this scene, and it had to be timed perfectly to ensure that traffic could move freely around the one way system in Framlingham.  Coordinating a skip on a lorry to leave just as the actors ran up the road was challenging, but the locations team were fantastic and communication was brilliant.’

Other locations that were used across Suffolk were Saxmundham Train Station and the village of Great Glemham.  The production also headed to Bury St Edmunds in West Suffolk for a day’s filming.  The Portable Antiquity Service office which is in the town was used as the location that Andy takes one of his finds to.

‘A special thanks to Suffolk County Council Archaeology Service for being so accommodating.  Their offices were taken over for a day and dressed up with new posters, and the desks were piled with boxes and files for the day.  This office is the place that any keen metal detector would take their finds, and one of the great things about the show is that it highlights the great work that metal detectors and archaeologists do.’

As well as help with locations Screen Suffolk also helped a new starter in the industry, Joe Nial, gain on set experience as a Camera Assistant.  Joe had completed ‘Set Ready Training’ at West Suffolk College.  Set Ready is a training and employment programme that supports the next generation of film and television talent as they take their first steps into production and on to set.

Joe says of his time on the show:

‘It was a really great experience and a big learning curve to see how different aspects of the industry vary in terms of the way they work. I learnt a lot as I am relatively new to the industry and this was my first TV shoot that I have worked on. Everyone was friendly, helpful and patient with me which gave me the opportunity to learn and ask questions if I was unsure of anything.  I couldn’t have asked for a better bunch of people.’

Set Ready Training will be rolled out at more locations across Suffolk in 2023.