Screen Suffolk had a fantastic visit to the FOCUS Production Show at the Business Design Centre in Angel, London, yesterday.  FOCUS is aimed at all the creative screen industries – including film, TV, advertising, animation and interactive.  It runs over two days every year at the beginning of December and it’s a great place to meet location managers, producers and other film offices.

It seems strange that it was only 2016 that Screen Suffolk launched here.  We shared a stand with Sarah Brown from Bentwaters Parks and it was a fantastic opportunity to shout from the rooftops about all that Suffolk has to offer productions.  Two years on and nearly 400 filming days later we returned to FOCUS to see some brilliant panel discussions and key note speeches from the very best in the industry.  A particular favourite was the panel discussion hosted by Film London.  It was a fascinating insight into the particular challenges of filming in the Capital – it really confirmed why the regions will become the filming destinations of the future.  Suffolk, with it’s close proximity to London and our wide open spaces as well as the fabulous talent in the region is already reaping the benefits of more filming each year. 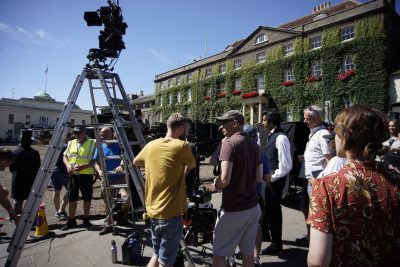 As well as the jam packed programme of events we also had a great time networking and caught up with several location managers who are keen to head east for their future productions.  We caught up with Harriet Lawrence, the location manager of ‘The Personal History of David Copperfield’ who came to Bury St Edmunds last year.  She’s keen to return to the Georgian Street scenes she found in abundance there.

Andrew Buckley, Location manager, also Executive Producer of the regions award winning short film ‘Sylvia’ spoke to us about his love for Suffolk and how keen he is to bring his next project to the county.

As ever we need you to register with us to make Suffolk the best county to film in in the UK so if you haven’t already sign up!