In profile with Neil Horsman Producer/Director and DOP 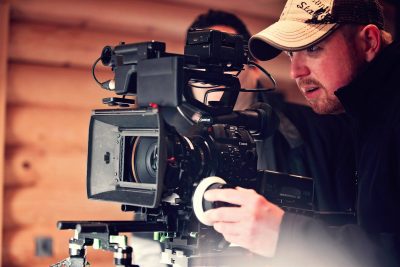 Who are you and what do you do?

I’m Neil Horsman, a freelance Producer/Director and DOP based here in Suffolk. I run an independent production company Vidoo Film, who provide full production services to a range of agencies, brands and companies across the UK.

I’m based near to Framlingham but work takes me right around the world from Beijing to Brighton.

I moved to Suffolk from London around 3-years ago, after a brief stop in Colchester. My wife Holly grew up in Suffolk, and we were keen for our children to grow up in the countryside. It’s definitely been a great move, and we have really started to feel at home here, it’s great to be surrounded by stunning countryside, and beautiful coastline but to also feel that London is still easily accessible for work.

I did a 3-year TV Technology and Production degree in Birmingham, graduating in 2005 and started by career in Live TV, working for Fremantle Media in London. My first job was working as a MSO (Multi-Skilled Operator), which was a dream way to start in the industry. I was thrown straight into it, learning a variety of disciplines ‘on the job’ such as Camera Operating, Vision Mixing, Sound Mixing, Graphics Operating and Lighting. I always knew that working in the Camera Department was my main goal, but learning so many other skills gave me a great founding within the industry, and even to this day allows me to really appreciate the roles of others on set and the challenges they face.

After working for Fremantle Media for about a year, I decided to take a long-planned Gap year to travel around Southeast Asia, Australia and North American before returning to London late 2006.

I initially started working on freelance basis for QVC Shopping Channel, picking up where I had left off working as an MSO or Technical Operator as they called it. After about a year of freelancing I had the chance to take up a fulltime position with Bloomberg News, working in their London Newsroom as a Technical Operator, across the European output for their Italian, Spanish, French and German news channels. After dodging a round of redundancies and the formation of a single European news channel, I was extremely lucky to be involved in the build and development of a brand-new state-of-art news studio Bloomberg commissioned. It was again a great learning experience and allowed me to really get stuck into a major project. The studio launched, and I was moved into the studio team which covered a variety of roles including Camera Operating (both Robotic cameras and PSC cameras), Jib Operating, Vision Control and Lighting.

After a thoroughly enjoyable 4-years at Bloomberg News I decided it was time to make a change, and really pursue my ambitions within the camera department and left to return to the freelance world as a Lighting Camera Operator and DOP. This led me to setup my own production company Vidoo Film in 2011 whilst I was in London, working alongside a range of agencies and brands on a whole host of content from commercials to social media content.

Although I do a variety of work, my main work these days is working on commercial and branded content for a host of UK and international brands such Samsung, Eat Natural, Vodafone, MG, Eat Natural, Aspall, Barco and many more. Depending on the scale of the project, I may work in a small team as a self-shooting Director, or oversea a larger 10-person production team as a Producer/Director.

I’ve been lucky to have been involved in a lot of projects over the years, with some exceptionally talented people, and it’s hard to pick just one project, but probably the project which springs to mind first is the short-form documentary I produced in 2019 ‘The Oystermen’ – we were blessed by a beautiful story, stunning location and perfect weather. The documentary went on to be nominated as a finalist in the Royal Television Society East Awards, something I was very proud of.

I think persistence is key, you need to make sure people know who you are and what you’re capable of doing. Keep reaching out to production companies and agencies, because there will be times when your email lands in a Production Managers inbox just when they need someone with your skills and experience – don’t give up!

After what has been a real rollercoaster year it’s great to see as Covid-19 restrictions are loosened productions getting under way again and a return to some sort of normality within the industry. I certainly think there is going to be long term changes within the industry to comply with Covid-19 regulations, but I think the creative industry is a very resilient and resourceful one, and good at adapting to change – I think more remote working, less people and smaller crews on set and more streamlined productions.

We have a huge amount of talent here in Suffolk, and I think the key is to network with others. There is a number of really inclusive and supportive film and creative groups run in the county, as well as lots of opportunities to be involved in passion projects – get out there, film, meet people and have fun!