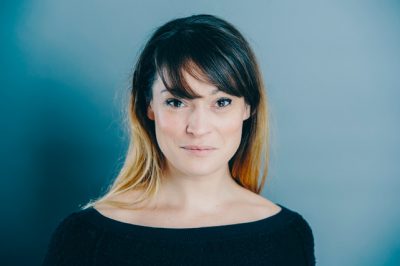 Alexa Waugh is a Suffolk based Producer and Line Producer who spends her time between London and Suffolk.

Alexa was born in Ipswich and trained as an actor before making the move to production by working in a post production house in Soho.  From there she found the love to working on the other side of the camera.  We got together with Alexa to find out about her path into the industry and her thoughts on how the pandemic has changed the way the industry works.

I was lucky enough to switch into production (where I really wanted to be) pretty quickly, working for small companies that were producing Ob doc and factual entertainment for big channels.  I progressed to freelance as a production manager and line producer on scripted content including THE NAZIS MEGASTRUCTURES and branded content with PULSE FILMS on FIFA: THE PITCH as well as working alongside Elton John’s production company on THE CUT: ELTON JOHN. I’ve also worked on music videos with HAIM and YXNG BANE. Moving across to independent feature films I have been lucky enough to work alongside Writer / Director TOM PATON and have Produced and Line produced 3 of his feature films including BLACKSITE, STAIRS and 400 BULLETS.

I have my own production company called Amunet Productions, and we released I LOVE MY MUM into cinemas of Spring 2019. It’s a comedy directed by Alberto Sciamma starring Kierston Wareing and Tommy French. I started on that job as a line producer 2.5 years ago and got promoted to producer early on so travelled all over Europe with the production and saw the film through the edit, sales and distribution. It was an incredibly tough and long journey but one I am immensely proud of.

When did you move back to Suffolk and how have you found it?

When I left Ipswich there was very little in the way of independent film and TV opportunities, so I felt my only way to make it was to move to London in search of the jobs I wanted. Now those jobs are moving to Suffolk and it’s getting very busy which makes me very happy! I love working in the area, the services and crew have massively jumped up over the years and it will only get better as the area brings in more projects.

How has Covid-19 affected the industry?

3 months off work has been both a blessing and a worrying time. Homeschooling, painting, lots of cooking, working from home and being with the family has given me a new perspective on things however it didn’t stop the itch of wanting to get back onto a set! Although production stopped, there was still a lot of activity within the industry, Screen Skills and Bectu holding daily zoom meets to discuss ways to get the industry back up and running when the government ended the lock down. These daily updates helped me a lot, eradicated the fear of missing out and kept my finger on the pulse. So much creativity happening too, I’ve lost count the amount of new scripts that have been read!

Have you managed to find work recently?

I was so lucky to line produce ALONE with Kirsty Bell (director) and Ben Charles Edwards (Producer) and Goldfinch, starring Derek Jacobi, Francis Barber, Sadie Frost and Jeff Fahey. We started prep during lock down and were ready to go with filming once lock down had been lifted.
Working from home during preparation (which I loved because I didn’t need to travel back and forth to london), we were able to get a production up and running; hard work when a lot of film council departments were still furloughed! But we overcame it and the production went off without a hitch during the months of July and August in London. Things were different and the budget took a hit with extra costs for cleaners, PPE equipment, Covid tests etc but not as much as was expected. We had a Covid coordinator on set at all times and the fantastic crew we had on board took all protocols put in place in their stride and it worked. It was amazing for all to be back on a set again!

Many obstacles still stand in the way of continuous work for everyone including insurance, Covid compliment contracts etc so I don’t think it’s going to be an easy process to get the industry back to full speed. However zoom and google meets have allowed those working from home to continue to still be involved and keep things moving and there are many productions working and trying to get going so fingers crossed it continues in the right direction!  Get yourself on the Screen Suffolk database. Research the connections between London and Suffolk and look at companies already working in the area. Contact them. Knowledge and perseverance will allow you to get a job and continue to work in the area after the last one has finished.

If you would like to find out about becoming a Covid Supervisor send us an email to info@screensuffolk.com or to register on the Screen Suffolk database click here.