Suffolk is so dedicated to filming, the county offices appear on screen – in the new Detectorists series 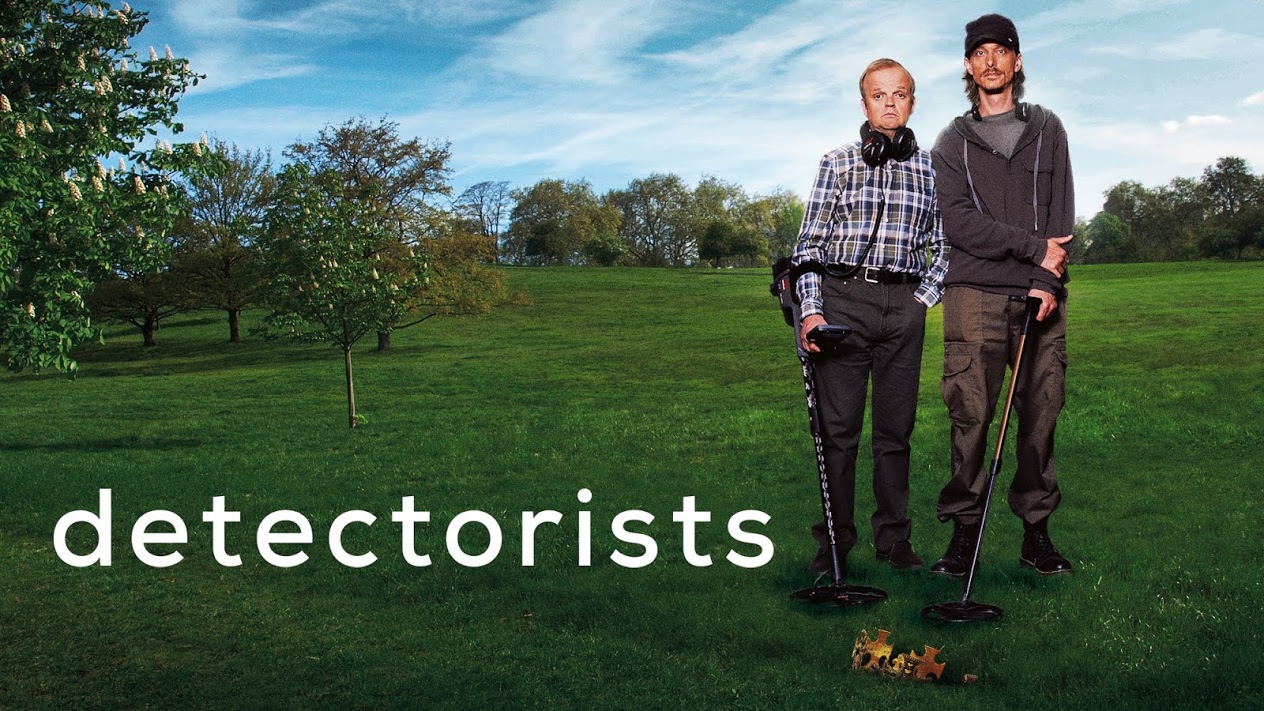 The third and final series of Detectorists, which has started on BBC Four and iPlayer, opens with scenes of slick city life, supposedly in London, but in fact filmed in Suffolk County Council’s Endeavour House in Ipswich.

Take a look at episode one here. And the series trailer here.

“The opening scenes were a bit of shock to those of us looking forward to our next dose of bucolic village life. The show rather cleverly created a background reflection of London’s Shard building in one scene, and inserted the London Eye in a backdrop. It works really well.

“The County Council was delighted to make the space available.

“About 23 cast and crew filmed inside Endeavour House for five hours, as a character leaves the lift and strides through the bright corridors and stairwells, checking himself in a glass office wall, making his way toward a meeting about the future of solar panels, and the next site they’ll occupy, which happens to be the farm where our detectorists have permission search.

“We’re always saying that Suffolk has the locations to double for anywhere and these opening scenes are a great example.”

In fact Suffolk itself is doubling for the fictional Essex locale of Danebury in the show, home to Andy, played by Mackenzie Crook and Lance played by Toby Jones.

Karen Everett continues, “In the first episode we saw Andy on brownfield land on an archaeological dig. That was shot at Ipswich’s Futura retail park. In the show, it’s looking like it could be a Roman site. I can’t say much about what happens, but there is a find.”

Karen Everett hopes the programme makers might be convinced to return for another series.

She says, “The show is so well loved, it would be sorely missed by viewers as well locals who’ve enjoyed having the production along to film, for weeks at a time, in the summer.

“Everyone so enjoys the little part they play in helping.”

The filming in June and July this year included a Vespa scooter being followed by Lance’s well-loved yellow 1970s Triumph TR7 along Mill Lane in Butley, and overtaking the scooter at Butley Mills studios.

A flat in Double Street, Framlingham is Andy’s home and the nearby Castle Inn is the exterior of The Two Brewers.

On Redwald Road near Woodbridge, we see a character spraying weedkiller along a roadside path. At the Bentwaters Parks entrance road Andy finds a hedgehog.

Station Approach in Saxmundham sees one of the characters being collected from a train station. The car is parked in the old Saxmundham police station carpark.

Karen Everett continues, “The local trainees who landed work experience on the production were so grateful and effusive about the opportunity this year. Suffolk really welcomed the production and would welcome it again.

“The show is something locals feel extremely proud of. They’re glad that this is the image of Suffolk portrayed across the world.”

Aine Kirwan who lives in Lowestoft was offered work experience through Screen Suffolk with the production’s Third Assistant Director.

She said, “The first person I met when I arrived was Mackenzie Crook, the writer, director and star, that was a bit surreal, especially because I’m a big fan of The Office as well.

“I was attached to the Third Assistant Director, filming in Framlingham College and around Framlingham, with scenes in the evening inside the White Horse pub there.

“My role was to make sure everything was set up for the next scene, and that the crew and cast were looked after.

“I had to listen to the radio a bit as well. There was lots of jargon, but even in one day I learned so much of it.

“The experience exposed me to so many different roles, all the different skills it takes to create the series. It was a great opportunity to see how it all works.

“I managed to have one-to-one time with the producer which I found really inspirational. It convinced me that I’d really like to aim for that role in the long term.

“Everybody was so nice and lovely, really welcoming and ready to offer me advice and talk to me about what they do.

“They gave me ideas about websites and job postings to look out for as well as the skills and assets they look for in people. You know if you’re a runner for example you need to show a lot of enthusiasm and always find something to do. You should never be standing around looking bored.

“It’s really interesting to hear about different people’s journeys and the different routes in to the business. I’ve decided that for me some extra study would be the best route to take, along with getting as much experience as possible on sets.

“I’ve watched the show because it makes me proud, being filmed in my home county, especially being a show as big as this.

“I really hope more productions come to Suffolk to offer us opportunities such as this.”

He said, “I’ve always watched the show. I enjoy it because it’s filmed locally. So I was a bit star struck to begin with, when the first person to come and meet me was Mackenzie Crook, writer, director and star.

“There were 63 on set which was a surprise to me, it was a lot. The crew I was working with said it’s common to find as many as 70 people in one department.

“I was working with the gaffer [the chief electrician on a film production] doing things like carrying lighting, pairing lights and adjusting filters. There were lots of technical terms I had to learn. Then, I was allowed on the set in between shoots for an hour or so to take it all in.

“Lighting played a really big part. At the end of the day we did a big scene outside the White Horse pub in Framlingham. The pub had to look very lively from the outside. So we had to light all the rooms.

“And because we were filming at 9pm, the light was changing very fast, so we had to adjust the filters so it looked as though the light was consistent.

“It was a long day from 10am to 10pm, but I was expecting that. I was really grateful for any onset experience. It’s important to see how one department communicates to all the other departments on set.

“It gave me access to people with loads of good experience in the industry to share. Being the BBC, everyone was very professional, very focussed, doing a great job.

“They were really well organised, and really good at keeping to a tight schedule. You find that everyone knows what they have to do and they get the job done. Seeing it all come together was really good.

“Getting experience on a major film set is great and possibly the contacts were the best thing.

“There was no clowning around but it was well worth it. In the future, I think I’d like to experience the camera side of things.”