Danny Boyle on the beach!

For the last two months the region has been a buzz with the filming of Danny Boyle’s latest film.  Written by Richard Curtis and set in Suffolk, the film centres around a singer struggling to find fame.

Screen Suffolk have been delighted to help with shoots all over the county but yesterday we headed over the border to Norfolk for one of the last bits of filming for the project.

Gorleston Beach was turned into one massive film set with over 6000 extras, as Danny Boyle pointed out it was the biggest group of extras ever to feature in a film on UK soil.  As a thank you the production team handed out vouchers for free burgers and ice cream.

The sun was shining and the atmosphere was electric as Danny Boyle welcomed everyone to the stage and directed proceedings from a platform above the Pier Hotel.  Himesh Patel who plays the lead then took to the stage and belted out several Beatles songs.

Not only were Screen Suffolk there to soak in this momentous occasion, we also wanted to find out what this film means to the people of Suffolk.

Among the crowd were Wendy Hodgson and Poppy Ambrose who came all the way from Ipswich.  I asked Wendy what drove them to come and be an extra. 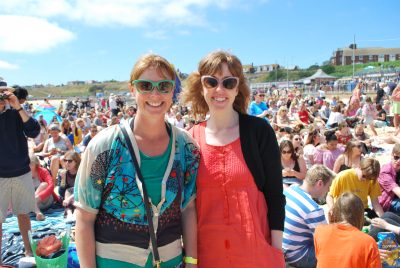 ‘I love Richard Curtis films and Danny Boyle as a director.  I’ve always wanted to be an extra. We’re having a great time, look at the weather, we’ve come all the way from Suffolk, Ipswich!’

Also in the crowd was Hannah Sutton who was an extra during the shoot in Halesworth, she was joined by her daughter Nancy and fellow extra Marie Ruth. 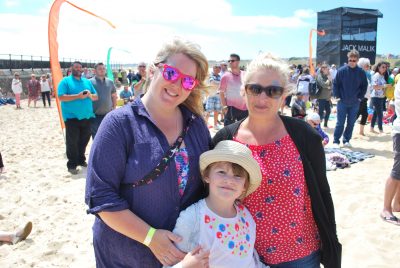 She commented, ‘It’s really good fun and we’re having a really good time.  We were in Halesworth and we got to be in the pub as extras and down the high street.  It’s a really good experience for Suffolk.’

We couldn’t agree more and it’s going to be wonderful to see the region under the spotlight when the film releases next September.