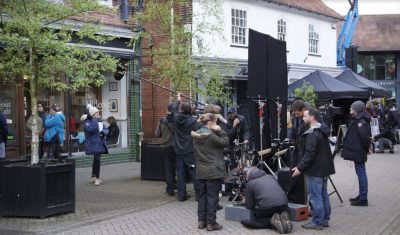 Almost 100 crew and an army of supporting artists descended on the small town of Halesworth in East Suffolk at the beginning of May for Danny Boyle and Richard Curtis’ latest film, yet to be named and filmed several crucial scenes in the town.

The Hideout Cafe was used as a cafe location but Halesworth Thoroughfare, which it’s on, is also expected to be featured heavily in the final cut.

Screen Suffolk went back to Halesworth to canvas opinion on the shoot from the perspective of businesses on the Thoroughfare.

Most businesses reported no loss of trade on the day and those that did thought it might have been down to the appalling weather.

Gary Lloyd from Hughes Electrical said ‘We found watching the whole process fascinating, the guys were all very polite and communicative, they would regularly pop in to tell us what was happening. We’d have to say it was a great experience to see, with a minimum of disruption.’

Many businesses are hoping that when the film hits the big screens in 2019 that Halesworth will benefit from the stardust effect.

Cath Bartlett, sales assistant from Banyan Fair Trade was delighted with the day ‘It was absolutely amazing to have a major film company filming in our little town. I’m a local woman and have lived in halesworth all my 52 years and I hope this will put Halesworth and Suffolk on the international map.’

The location team embraced Halesworth and it’s unique look and didn’t change any shop fronts when filming the scenes.

Nigel Kemp from Halesworth Toy Shop hopes having his shop front visible in a Hollywood style movie will make business boom. He said, ‘It was very good publicity for the town and I look forward to seeing the final results on film.’