The Detectorists Locations in Suffolk 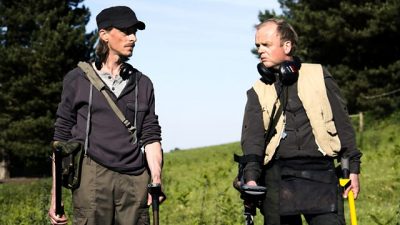 The Detectorists locations in Suffolk may not be as easy to find as you think, although its set in Essex, the filming took place across numerous locations around the county.

We are frequently asked about where to find the locations used by Mackenzie Crook and his team, by fans of the show, over the three series. In fact this isn’t the first time we’ve talked about The Detectorists at Screen Suffolk.

Although the Detectorists locations are spread around the county, a large amount of filming is based around the hometown of Ed Sheeran in Framlingham, also famous for his ‘Castle on the Hill’ video that was entirely shot in the town and Suffolk.

Here you’ll find many of the Detectorists street scenes and also the exterior of the pub used throughout called the Two Brewers, in real life this is called the Castle Inn. The interior is a few miles down the road In Great Glemham at The Crown.

St Michaels Rooms, also in Framlingham, is the location of the Scout Hut, the home of the Danebury Metal Detecting Club and Framlingham College doubles for a university in the second series. Double street and The Lemon Tree on Church Street are also featured, with the latter having a view over the churchyard.

Heading out to the coast to the sleepy village of Orford, which is famous for The Pump Street bakery and Smokehouse. Orford Primary School  serves as Becky’s school.

Other locations include Bentwaters Parks for road and work shots, the old Police Station car park opposite Saxmundham Train Station and Endeavor House in Ipswich which doubled for The Shard at the start of the third series.

The fields, that a large part of the detecting storyline is at, are Bishops Fields in Aldham which is outside Ipswich; this is also the location of the round-tower Church that is often seen in the background.

Many productions are now seeing the benefits of bringing a whole production to Suffolk due to the range and breadth of locations that we have to offer. All these can be seen at out location hub.