In advance of the premiere of ‘Institute’ on BBC Four, Screen Suffolk sat down with Amit Lahav, Artistic Director and Rosalind Wynn, Executive Producer from Gecko, to talk about their film version of the successful theatre show which has toured globally. The film was created and shot entirely in Suffolk.

Why did you shoot in Suffolk?

With the opportunity to create our first feature film, it was very important for us to be able to create from the company’s home base and celebrate the creativity, talent and support present in Suffolk.

How did you go about finding the right location?

Finding the right location was challenging as there are two very distinct worlds that we needed to create – a more literal world of corridors and rooms and a more poetic world of the ‘treatment room’ which required a large empty space in which we could create the image of a ‘treatment mat’ floating in the dark. This room also needed some kind of observation window for the nurse characters to watch the patients. Because of limited time and budget, we really needed these spaces to be close to one another, and would have struggled to build the corridors and rooms world completely within a warehouse.

In order to find the right location we racked our brains for spaces we knew in Suffolk and reached out for help. Screen Suffolk was key to this process and introduced us to the team at Bentwaters Park, an old air base near Woodbridge which is used a lot for TV and film productions. We visited the site with Screen Suffolk and thought it was perfect, using a combination of the Hush House, an old jet engine testing hanger with an observation room looking out across the hanger, and the Star Wars Building, a strange web of corridors and rooms. 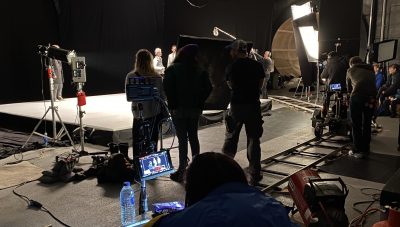 Filming in the Hush House at Bentwaters Park, Suffolk.

At what point did you hear about Screen Suffolk and how did they help the process?

The Ipswich creative industries community is tight knit so we’ve known the Screen Suffolk team for some time. We’ve recently been involved together in round table discussions about the ambition to create an art and media hub in the old Burton’s Factory on the Waterfront adjacent to the Warehouse, which will become our new HQ and a state of the art studio called The Creation Space.

In addition to help finding the location for the shoot, Screen Suffolk also helped us to find our crew for the film through their database of Suffolk based film creatives, most notably our brilliant Production Designer Eileen Aldous and Art Director Stuart Brindle, whose attitude, passion and local connections achieved incredible things on a very small art budget. We also found our wonderful Makeup and Hair Artist Hettie Leviston and Script Supervisor Juley Harding, and local caterers Country Cuisine who fed our hungry team.

What challenges did you face?

Our main challenges were related to time and budget as we had very limited time to prepare the design in the space and only 8 days to shoot a 60 minute film. Our team worked tirelessly to achieve the film and we’re incredibly grateful for their passion and commitment.

Additionally, in the Hush House, we had a challenge around heating. We were filming in early December and, while lucky to have relatively mild weather, were unable to use the main heating system of the hanger due to the noise. We hired a combination of infrared and blower heaters to create warm rooms to the side of filming for people to wait in between their scenes and to heat in between takes, and tried to keep people stocked with hot tea.

We partnered with Penta Hotel in Ipswich to accommodate the team of around 25 people choosing to be in Ipswich with multiple food options and where everyone could be accommodated together. Everyone was really comfortable and well looked after at Penta, with a drive to Bentwaters Park, we had long shoot days requiring a detailed car sharing / transport plan.

What were the highlights of the shoot?

The shoot was incredibly full on but also massively rewarding.

It was an invaluable experience to work with such a gifted team. Director of Photography Emma Dalesman was sensitive, intelligent and extremely generous and respectful of Amit’s need to grow throughout the process. We were also very lucky to have our brilliant editor Todd MacDonald with us for the shoot, who began to edit the film together as we were filming – allowing us to see the world of the film come to life!

This was Gecko’s first film, how did it differ from the theatre production of Institute?

Amit’s focus when he makes something for stage is to piece together the ideas for the production bit by bit, and over time more and more glue brings the whole thing together. Some of that process is quite filmic in its thinking – this shot, this element, this location, the lighting, the movement – how do we bring all of this together so that we’re seeing something or feeling something in a certain way?

Adaptation from stage to film is all about honing in on the visual language and storytelling piece by piece, building towards a composition of something that illuminates and elaborates the central feelings Amit is trying to get to.

The film, while containing familiar storylines and scenes from the stage production, is a very different final product. A large difference is the design; the film maintains the central visual of the ’treatment mat’ at the centre of the stage design through a very theatrical setting in which scenes take place on a similar mat in a vast darkness. However, the towering filing cabinets of the stage production are replaced by a series of rooms and corridors in which the characters exist. Similarly, we see more characters in the film – the four lead men are joined by 3 nurses that assist in the treatments of the patients. Martin’s ex Margaret and the ghost of Karl’s father also haunt the corridors. All of this serves to depict the central theme of care through the eye of the camera.

In some ways film is a more refined tool, which makes it easier, and in other ways it makes it much harder. In terms of the proximity and closeness to feeling a character’s moment-by-moment reflections, you can really get in there with film and you can really highlight something that, on stage, can feel frustratingly far away. However, with film you can lose the sense and the heartbeat of being in the room with someone and the visceral sense of actually being in the presence of another being, the experience that you always have with live theatre.

In theatre there’s something about the setting with all of its potential distractions that mean you immediately enter into a contract with the audience, which is an abstraction from the world that they’re in and the details of their lives. You use that abstraction to take the audience away from all of that. With film there is potential to create a much more naturalistic world. You have the opportunity to get things exactly as you want them. Amit had to keep remembering the poetry of the production and twisting that the film – we’re in a corridor now, we’re not in an abstraction of a place, we’re in a real place.

Any advice to productions looking to come and film in Suffolk?

Suffolk is a hot bed of creativity with numerous artists, companies and creatives calling the county home. Its proximity to London helps with logistical issues and costs and yet it feels distant enough to really escape and focus fully on the project. This combined with a real keenness to support creative enterprises makes it a perfect place for filming.

Institute is on BBC Four at 11.10pm Sunday 19th July and available on iPlayer after.