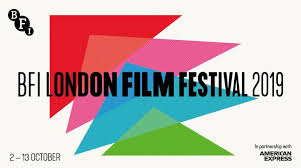 The long awaited European premiere of Armando Iannucci’s The Personal History of David Copperfield is set to open 63rd BFI London Film Festival next Wednesday. The film which was shot on location in the UK, is produced by Kevin Loader and Armando Iannucci and stars Dev Patel, Tilda Swinton, Hugh Laurie, Peter Capaldi and Ben Whishaw to name a few.

Screen Suffolk had a whale of a time working on the production last year during the hot summer of 2018. The film uses three different Suffolk locations all within the stunning town of Bury St Edmunds. We helped the production turn Angel Hill, the main square in the town, and Chequers Square into Victorian London. Angel Hill went from car park to Victorian London in the space of a day. Production had to remove road signs, parking meters and even had to take down a blue plaque for the wall that said ‘Charles Dickens stayed here’! 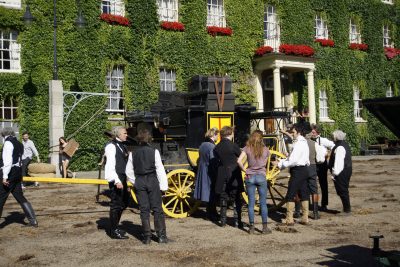 The crew numbers on the day for filming in the town centre numbered over 200 people due to all the coaches and horses being used in the scene. The Angel Hotel was a back drop and is one of the only examples of a Georgian coaching inn that remains to this day. Screen Suffolk can’t wait to see the impact the film has on Bury St Edmunds, one people flock to the region for their own Dickensian experience. 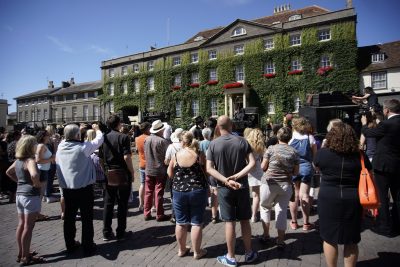 The response on the day to the filming was fabulous with school children, shoppers and workers watching the action.  Location manager Harriet Lawrence was really pleased to offer an open set so that all residents could drink in the atmosphere of the production.

Team Screen Suffolk are heading to London next week to watch the film and can’t wait to report back.